…and a whole lot of fun!

Guess that pretty much sums up our first Christmas out of the states, here in Guatemala Oh that and crocodiles. I’ll get to all that in a moment, but first, wanted to premise our relationship to this grand old holiday to bring some context into this story.

You see, all my life, Christmas has always a mixed bag for me, always a question of what to do, where to go, who to celebrate it with, or if I (we) celebrate it at all. From my personal perspective, the holiday holds no meaning to me, since I was raised in a Jewish household. As a kid, Christmas was always something those “other” families celebrated. We celebrated Hanukkah, and as an accolade to my mom’s achievement, Hanukkah was always as special holiday for my brother and me.

As an adult, I celebrated Christmas with my partners, more of a celebration for them, but personally always carried on the tradition of lighting the menorah at Hanukkah. Am I religious? No, I have no connection to the religion at all with the exception of it being a part of my cultural identity. This just happens to be what I know and this is what I gave to my son, Miro. He actually never minded since he got celebrate Christmas with his father when he was around so he’s one of those kids that gets a double holiday in December.

When we arrived in Antigua in the beginning of December, it was Hanukkah We were lucky enough to meet a wonderful couchsurfer named Zenobia, from Poland who invited us to light the menorah with her. But Christmas? We had no idea.

Two days before Christmas, we received an invitation from couchsurfers Andre and Liz from San Francisco. They too were traveling and found themselves in Antigua for the holidays. They invited us to spend Christmas with them. We are glad we did.

Liz and Andre are two amazing travelers, on their way to Brazil from San Francisco in their humble American bought SUV. They left San Francisco a couple of months before and with the help of couchsurfing and many maps have had many wonderful adventures. In Antigua, they decided to rent a place, actually just outside of Antigua in a city called Jocotenango. They had the second floor in a house with family and felt very comfortable at this house for the week.

Liz is from San Francisco and Andre is from Brazil and they met in bay area. Liz was involved in working with non-profits in the Bay Area and I’m certain we know some of the same people since I had many clients in the non-profit world from there. We are still trying to figure it out. So the two of them had decided to set out on an adventure together, spanning many countries and start a new life together in Brazil.

We met them at the park and they had with them three friends from the tech scene also from the Bay area. They wee Rohan, KC and Neil. Miro got acquainted with them in the park immediately challenging them all to race around the trees. The climate was festive in the park, many people in costumes parading around with drums, both adults and children. This is going to be fun, I thought.

After the park , we picked up two other travelers from France, that Liz and Andre had met on their travels. The nine of us grabbed our groceries, drinks and white elephant presents and headed back to the house. 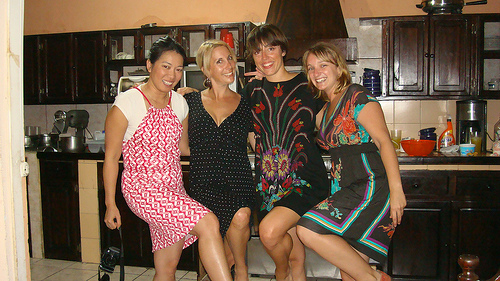 My contribution was an odd shaped bread crocodile, which became the center piece of the dinner table and the evening’s alcohol supply. I brought ingredients to make a pineapple and coconut rum drinks and made fabulous festive concoctions that kept the gang happy throughout the entire night. We all came together for what turned out to be 4 hours of dinner preparations, chopping, cutting, mashing, draining, mixing, combining, frying, baking, garnishing and drinking and amazing conversation. This group was an exquisite blend of sweet and savory, the perfect blend for holiday celebrations.

The night went on with 3 courses of an amazing feast, a white elephant gift giving game topped off with our firecracker rendition of Christmas carols. And for the finale, we blew up the bread crocodile, watched his little body turn into bread crumbs. Now this was our perfect Guatemalan Christmas we’ll remember for years to come.

A single mom & son's travel blog, chronicling their nomadic adventures as they experience global education through world travel; Raising Miro on the Road of Life.

Read more about us: here.

Your Support Means the World to Us!

We are so grateful to you, our audience for taking this journey along with us. If you are inspired to support us with a donation, please know it goes a long way in keeping us safe + secure in the world. We pay it forward everyday and are grateful for each experience that comes our way.

The Undisputed Treasure of Guatemala: the Ruins of Tikal

We love hearing from you, leave a reply below! Cancel reply

This site uses Akismet to reduce spam. Learn how your comment data is processed.